Are you sure you want to remove the following product from the cart?

What is an Eternity Ring?

Eternity rings are a symbol of everlasting love, a powerful expression of the commitment between two people. Traditionally given to mark a significant milestone in a relationship such as a special wedding anniversary or the birth of a first child, an eternity ring is a gift that will be cherished for years to come – for an eternity – so it’s important that you choose carefully.

Whether you’re seeking a classic diamond eternity ring or a colourful gemstone eternity ring, we give you all the advice and guidance you need to ensure that you buy the ring that’s just right for your loved one.

Eternity rings are usually given to commemorate a special milestone in a relationship: a special wedding anniversary, the birth of a new baby.

While eternity rings are a symbol of enduring love, they are also a symbol of the continuing cycle of life. This is why they are often presented to a mother on the birth of her first child. In particular, a diamond eternity ring is often given to a new mum. After all, she really does deserve it!

With no beginning and no end, rings have been symbolic of eternal love for centuries. Rings given as love tokens were worn on the third finger of the left hand, a tradition believed to have derived from the Romans who believe this finger contained the Vena Amoris, or the Vein of love, said to be directly connected to the heart. Although this is a romantic myth, the tradition of wearing an eternity ring on this finger has continued in most modern cultures.

The first known eternity rings date back to 2000BC and the Ancient Egyptians. The Egyptians didn’t necessarily use the ring to mark a specific occasion; instead they gave a ring as a token of eternal love and life. These early examples of eternity rings were often simple bands of metal set with a stone. Others portrayed a snake swallowing its own tail – a common symbol used to represent eternity.

Fortunately for the recipient, eternity rings no longer feature snakes swallowing their own tail; however, the symbolism of a never-ending circle very much remains. In the 18th century, eternity rings featured any lavish gemstones that were readily available at the time. In the 19th century, diamond eternity rings became fashionable and today are considered the classic eternity ring. However, gemstone eternity rings set with a combination of precious coloured stones and diamonds can be equally as meaningful and symbolic.

HOW TO WEAR AN ETERNITY RING?

Eternity rings are usually worn between the engagement ring and wedding ring. There aren’t any hard-and-fast rules though, and many women prefer to showcase the beauty of their eternity ring by wearing it on its own on the right hand. 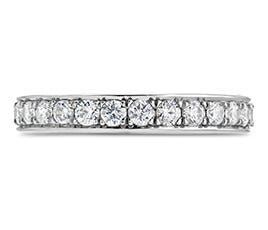 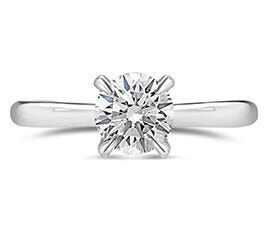 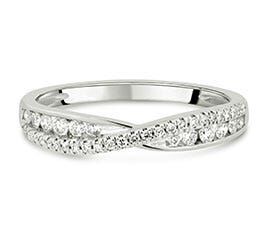 Diamond eternity rings are the traditional choice for this symbol of enduring love. Why? Quite simply, there is no gemstone as precious, rare or beautiful as the diamond, and this exquisite stone has a long association with love and romance. After all, Cupid’s arrow was said to be tipped with diamonds. Furthermore, every diamond is unique – just as your love is unique.

When you’re buying a diamond eternity ring, one of your main considerations will be the shape of the diamonds. While there is a large array of diamond shapes available, some are more typically used in eternity rings than others. 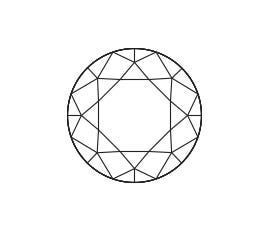 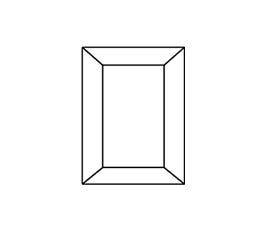 Coloured gemstone eternity rings are a stunning alternative to diamond eternity rings. Coloured stones add a certain spice to eternity rings and tend to be less expensive than an eternity ring set only with diamonds. And they can be incredibly meaningful and personal. After all, every woman has her favourite gemstone.

Full eternity rings are set with stones (typically diamonds) around the entire shank, or band, of the ring. A beautiful, luxurious choice, a full eternity ring glistens from every angle. Full eternity ring are usually gracefully slim and work perfectly worn between an engagement ring and wedding ring, although they are equally stunning when worn alone on the right hand. Please do note that full eternity rings cannot be resized; however, if you do get her ring size wrong (and yes, that does happen), we are happy to exchange for the correct size.

Eternity rings are primarily available in platinum and gold, the two most precious of metals. The metal you choose for your eternity ring will depend on a number of factors. Ideally, you should buy an eternity ring that matches the wearer’s existing jewellery, particularly if she is going to wear the ring between her engagement ring and wedding ring. 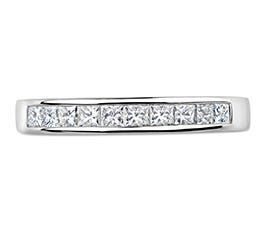 A platinum eternity ring is the ultimate in luxury. Platinum is the rarest, most precious metal on earth. It has a natural brilliant white sheen, and its beauty and lustre makes it the perfect choice for a diamond eternity ring as it showcases a diamond’s brilliance magnificently. Platinum is very durable and dense – it is harder wearing than gold – so it is ideal for an eternity ring that will be worn every day. It also has a high purity level and is therefore hypoallergenic and kind to sensitive skin. 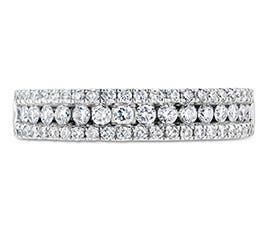 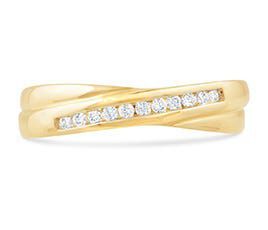 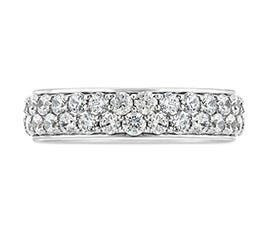 Claw-set eternity rings are also known as prong-set eternity rings, and use the traditional method of holding gemstones in place with a metal setting which runs up the side of the stones and overlaps slightly at the top to hold it snugly in place. More suited to round brilliant stones, a claw-set diamond eternity ring is an exceptionally beautiful piece of jewellery as it allows the maximum amount of light to enter the stone, giving the most intense sparkle.

In channel settings, the metal forms a channel at the two edges of the ring in which the stones are set. Channel-set eternity rings are a modern variant and this setting is suitable for round brilliant gemstones, princess cut diamonds and baguette diamonds. This is a very secure setting that isn’t prone to snagging as stones are set flush within the ring.

Eternity rings featuring pave setting have the shank of the ring paved with small stones. Held in place by metal prongs or beads, an appearance of continuous small diamonds is achieved.

Stones set in a bar setting are separated using metal bars held perpendicular to the ring’s band. Used for stones of the same size, the effect is a contemporary eternity ring, and the bars are often as much part of the design as the gemstones. Bar-set diamond eternity rings let in a lot of the light, creating a sparkling piece that’s sure to be admired.